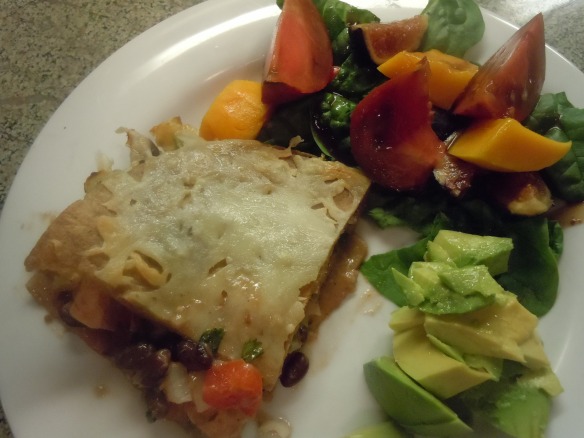 I was smiling to myself as I was making the Chicken Chile Bake last night, (which is basically a casserole), because I couldn’t bring myself to type the word “casserole” on Monday’s “Weekly Menu” blog…

When I think of casseroles, I think of canned cream of “something” soup, (with way too much salt), and the cooking genre of the 60’s and 70’s.  Remember the tuna casserole? Tuna, noodles and peas?  My mom didn’t make casseroles very often, (She was actually ahead of her time in terms of healthy cooking), but I had more than my fair share of tuna, and hamburger (remember?) casseroles at parties, friend’s houses and relative gatherings.

This recipe is not vintage, but it is a casserole.  I got it from a cooking class my daughter took at her school about 6 years ago.  I modified it to make it more healthy and added veggies.

It was 4:40 and I had to get dinner prepped and cooked before 5:25. Earlier in the day I had realized that I forgot to cook tonight’s chicken on Monday when I cooked the Southwestern Chicken.  That would have been a time saver… Note to self…

So I began by preheating the oven to 375 and turning the grill on high.  Luckily, I had already washed and cut the chicken on Sunday, so it was just a matter of putting the chicken on the grill.  You can also bake the chicken at 350 for about 20 minutes– but the real time saver is if you cook this chicken earlier in the week when you make the Southwest Chicken.

While the chicken was cooking, I mixed the following in a large bowl:

1 Can of black beans, drained

1 Cup of plain yogurt (Consider using instead of sour cream.  I use goat’s milk yogurt because of my daughter’s allergy to cow’s milk.)

The other half of the cilantro from Monday, chopped.

In the middle of getting all these ingredients into the bowl, I flipped the chicken (after about 3-4 minutes).  3 minutes later, I tested the chicken, pulled it off the grill, diced it and mixed it in the large bowl with the other ingredients.

Then I lightly sprayed the bottom and sides of a 9X13 and 8X8 pan with canola oil spray, and then placing one layer of whole-wheat tortillas on the bottom of the pan.  I followed up with a portion of the chicken mixture, and another tortilla layer.  I repeated the layering, ending with a layer of tortillas on top. 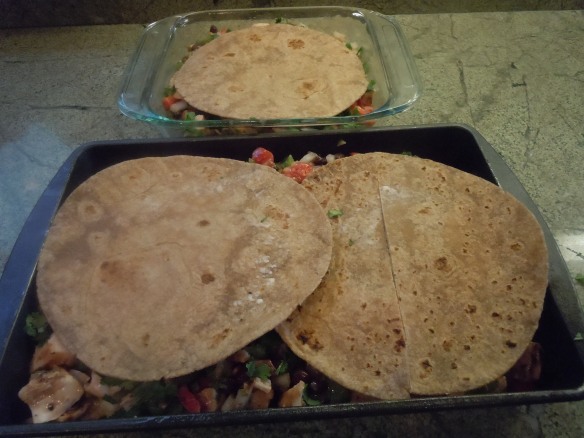 Putting the "Casserole" in the oven

After 20 minutes, I pulled the casseroles out of the oven and went to my second “Back to School Night of the week.

An hour later, I was home, preheated the oven to 375 and put the casseroles in for 10 minutes – just enough to heat through.

I laid out the plates, split an avocado among the four of us, and made a small side salad with figs, tomatoes, and mangoes, topped with the no oil balsamic vinaigrette. I pulled the casseroles out of the oven and served.

A 9!  Everyone loved the dinner.  My husband had a small second portion, but everyone else was full.  It was really great to have most of my nutrition in one dish.  You really don’t even need the salad, because you have a great variety of vegetables in the casserole, but if you like salad like I do, it is always nice to eat fresh fruit and vegetables.

I will be looking for more “casserole” recipes for the fall and winter sans the canned soup. The one dish meal – so easy!  …History repeats itself – with a healthy twist!

1 jar salsa (you can mix a few together)

For the side dishes:

Greens with fresh fruit, tomatoes, or whatever salad fixin’s you have

1.  Cook chicken – bake or grill.  Hopefully you can pair this dish with another chicken dish and cook the chicken at the same time and save time.

4. Place one layer of whole-wheat tortillas on the bottom of the pan, followed by some of the chicken mixture.

5. Repeat step 4, alternating a layer of tortillas and a layer of chicken mixture.

6.  Top with a final layer of tortilla and lightly sprinkle cheddar cheese on top.

8. While Chicken Chile Bake is heating, divide the avocado across the 4 plates and lightly sprinkle salt if desired.  Portion some greens and salad fixin’s on each plate.

9.  Once Chicken Chile Bake is hot, pull out and serve with salsa on the side.  Ol´e!